I've always loved dichroic filters as a way to color light. These are different from normal filters (think theater gels) in that the color comes from thin-film interference rather than pigment absorption. Similar thin-film effects gives rainbow colors to oil slicks and the saturated sapphire of Morpho butterflies. A characteristic of dichroic filters is that the color transmitted depends on the angle of the light through the dichroic layers. There's a simple geometric reason for this: the color transmission depends on the thickness of the layers seen by the light: if you tilt the filter the apparent thickness will increase. Another neat property is that the filter does not absorb any light, rather it reflects the complementary colors. This means that a dichroic filter will stay much cooler under bright illumination like stage lighting, as it is not absorbing much energy. In fact the pink hue of many halogen reflector bulbs comes from a dichroic "heat mirror" that lets longer-wavelength infrared light pass (to help cool the bulb) while reflecting visible light.

Proper dichroic glass filters are the result of a (presumably expensive) process that lays down atomically thin layers of differing refractive index. While you can buy them from Edmunds and similar precision optics manufacturers, they are expensive and typically small. Another source is to harvest them from high-end stage lights or LCD projectors (where they are used to separate and recombine the red, green and blue color channels). One of my favorite objects is a dichroic color combiner prism salvaged from a 1990's era Hughes video projector. Anyway, I love the varicolored effect that dichroic filters produce when placed in front of a white light as the different angles change the filtered color. This photo shows 3M CM500 film placed over a decapped LED bulb and shining against a wall. 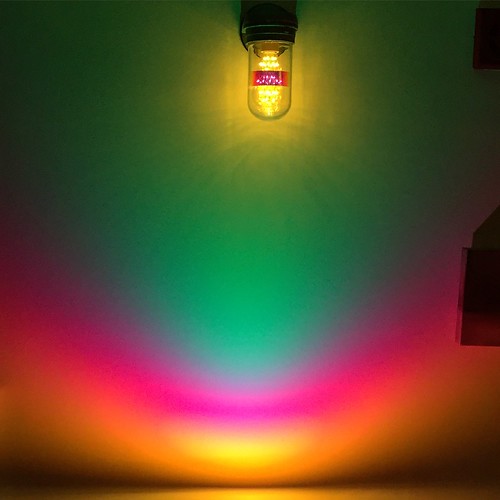 Seeing as how glass dichroic filters are typically expensive and/or hard to obtain, it was great to find that the 3M corporation makes plastic dichroic film under the "Radiant Light" brand name. There seem to be two types: CM500, which transmits blue/magenta/gold, and CM592 which transmits cyan/blue/magenta. I've found the following sources: Inventables (seems to be CM500) and Amazon which is definitely CM592. Here's a side-by-side comparison with CM500 on the left and CM592 on the right. (Note that the Amazon tape is adhesive while the Inventables sheet is not.) 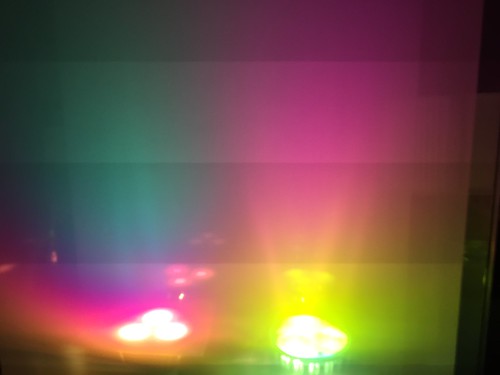 More examples of dichroic lighting effects. Here's a dichroic filter salvaged from an LCD projector and wired to the lamp in the hall outside my apartment, giving a warm yellow-to-red ombre fade. 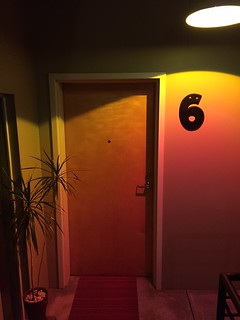 Here's a little bit of a color fail: this is an optical filter from an auto-darkening welding hood filter I bought for the LCD shutter. I'm holding it so you can see the transmitted light (green bar on top) as well as the reflected light (magenta below). Thus the filter transmits green and reflects red and blue light which combined form magenta. It is also not very angle-sensitive. This makes sense: a good welding filter will reject bluer short wavelengths (damaging UV) and redder long wavelengths (hot IR) leaving only the greenish center of the visible spectrum. It's also good if it's not very angle-sensitive so the filter works regardless of orientation. 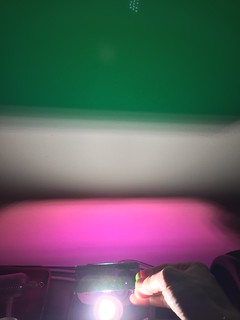