A Spectrum Analyzer on your Face

Every time I see another pal get laser eye correction, I get a little sad. Not only are eyeglasses a tremendous fashion statement, but they are super handy as well. If you wear glasses, you are likely also wearing a handy optical spectral analyzer. Yes, it's true: observed at the right angle, the edge of your glasses works like a prism and refracts incident light into its component spectral colors. In optics this is called "chromatic aberration" and it's generally considered a bad thing, but in this case I consider it a feature instead of a bug. Here's an example looking at a mercury discharge lamp (like from a street light) through the edge of my glasses: Let's zoom into the colored smudge on the edge of the glasses. See the distinct blue and the green? Those are the spectral lines of mercury! Note the blue and green lines (and a faint orangeish line not discernable in the glasses).

Here's a white LED. White LEDs are a mixture of light from a very bright blue LED driving a yellowish phosphor. Early LEDs had a ghastly bluish color but advances in phosphors have made them sometimes hard to tell from more conventional light sources. The giveaway is the bright smear of blue in their spectrum: Zoomed in, you can clearly see it. The camera only captures it approximately, it's much more obvious in your glasses, try it sometime. One more example, a neon discharge like in small indicator lamps and flicker bulbs. This is a decorative light fixture I made for my dining table. Zooming into the spectrum, you can clearly see the telltale green and orange spectral lines of neon: These are the spectral lines in higher resolution: 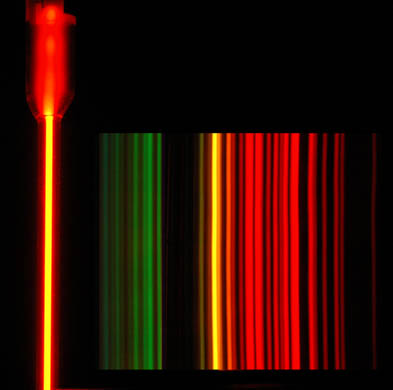 As a semi-pro lighting designer, I use this trick all the time to discern what kind of light sources are being used. Try it yourself! It's probably most obvious on magenta light (from theater gels or LEDs), as magenta is a mix of low-frequency red and high-frequency blue light which spreads out nicely. Of course, if you are cursed with perfect vision you will need some equipment for the same results.